Photovoltaics, commonly called PV for short, is a solar energy technology that utilizes certain properties of semiconductors to turn solar radiation into electricity. Photovoltaic systems are typically composed of wafers made of crystalline silicon. These solar cells are then combined to form a module or solar panel. These panels are then combined to form an array of panels to complete the system. Photons, the fundamental particles of light, strike the solar cells and initiate a process that causes a small electrical direct current (DC) to form. When the current of each cell in the whole array is combined an appreciable amount of electrical power is produced with no moving parts, noise, or pollutants. Electrical components such as inverters and charge controllers then condition the DC power from the array and either direct it to DC loads (appliances and lights) as found in some off grid applications or convert it to AC power for AC loads, the most common application.

PV electricity typically displaces some form of fossil fuel power generation. If the latter is very expensive, such as to a rancher’s well pump or a home in a remote location, then a PV system could save a lot of money. There is also the “green” energy aspect. Photovoltaics is environmentally friendly, producing energy without noise or pollutants. For many, a PV system makes a statement about protecting the environment and conserving our nonrenewable resources. Also, since PV systems have no moving parts, they are very reliable and estimated to last at least 30 years. This means very little maintenance will be needed. There is also the matter of energy independence. Because of power outages, a few who supplement their grid-tie electricity with PV opt for a hybrid small battery system where critical appliances such as refrigerators continue to run; and, of course, any stand-alone systems or off grid homes have no vulnerability to power outages whatsoever. Photovoltaic produced energy is also a hedge against rising utility rates. The DOE states that Colorado electricity rates increased 24% over a 4 year period prior to the recession, about 5% compounded annually.

Most people would say that the most significant disadvantage is the upfront cost, however it now costs about 25% of what it cost 12 years ago and a loan program is available through the Colorado Energy Office at a rate of 2.9%. We will be happy to help you with this. Another complaint has been the panel square footage needed to offset one’s utility bill, however because of improvements in panel efficiencies the square footage needed today in 2021 is about 57% of what was needed in 2008. Another complaint has been that if the system employed batteries that the maintenance was a real chore, but with the new lithium battery paradigm there will be no maintenance.

The 3 Ways To Install PV 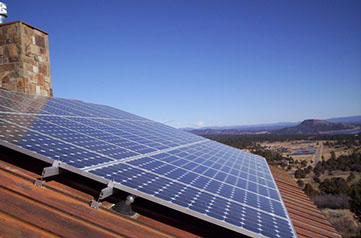 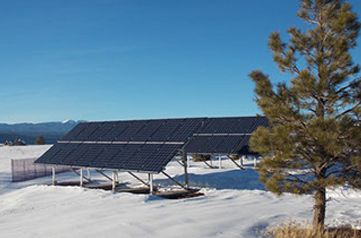 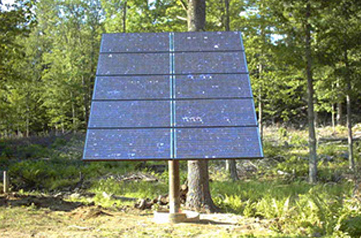 How Big Of A System Should I Buy

To begin the process we will ask you for the kwh (kilowatt/hour) number from 12 consecutive utility bills. Add them up and divide by 12 to get the monthly average. You can also call your utility with your account number and they will provide you with the monthly average over the phone. We will then take this number, the tilt angle of the roof and the azimuth or compass orientation of the roof, then plug these values into software provided by the DOE and we can determine the number of solar panels needed to match the kwh monthly average of your home or business. This will be the maximum and recommended size of solar system. The system can be smaller and offset a fraction of your annual consumption if there are budgetary constraints or limits on the roof space. Expanding the system to more panels later is also a possibility but be sure to tell us you might be interested in doing this so that the inverter specified in the proposal will be big enough for later expansion.

In the solar industry it is said that the decision to buy solar is ultimately emotional. Nonetheless, we all need to believe that we are spending our money wisely, that we are not throwing it away. Saving our planet is all important, but we would rather do it with money well spent, thus the need for cost analysis. Currently a solar photovoltaic system will provide the consumer with an ROI (return on investment) the first year of anywhere from 7 to 11% and it is a sure thing. Compare this to a CD in a bank with an ROI of about 1/2%. An ROI in the stock market is anybody’s guess but it is not a sure thing like solar. Also you are not taxed on your solar savings either like you would be with earnings in the stock market.

Of course this is all based on cash up front. Some of us will have to borrow the money, perhaps in a home equity loan or a new home mortgage. Surprisingly, the PV system tends to be cash positive from day one since we do not have the big initial cash outlay. The borrowed money payment (principal + interest) is generally less than the money saved on the electric utility bill, albeit small at first. Then with the utility cost inflating annually and our monthly payment staying the same, our savings gets better every year. Then if, for example, the term of our loan is 15 years, our savings really jumps after that.

If you own a commercial building the incentives are the tax credit of 30% plus the MACR 5 year depreciation that is potentially worth another 20% plus the utility REC payment. This makes for an even better ROI than with residential.

This is a commonly used term to calculate how much time it takes to break even, when the accumulated energy savings is equal to the system cost. However, the term payback obscures the fact that a solar system is an investment and no one ever uses the term payback when talking about an investment. ROI is the proper comparative term for investments. A bank CD is 1/2 of 1%. Solar PV residential often has a 7 to 11% ROI and commercial a 15% ROI. Sometimes you can get these kinds of ROI’s in the stock market or real estate, but it comes with risk that doesn’t exist with a solar system investment. And if you’re thinking that the initial cash outlay is money lost, this is not the case. Just like your money in the bank earning interest, the solar system is money transferred to your home equity.

How can we help you?

Long story short, solar has a good return on investment, is risk free, is good for the planet, and a reason to feel good about yourself. If you like what you’ve read here give us a call and we will be glad to answer your questions or come to your home or business for a solar site analysis. It’s free of charge, no obligation, and no pressure sales tactics.